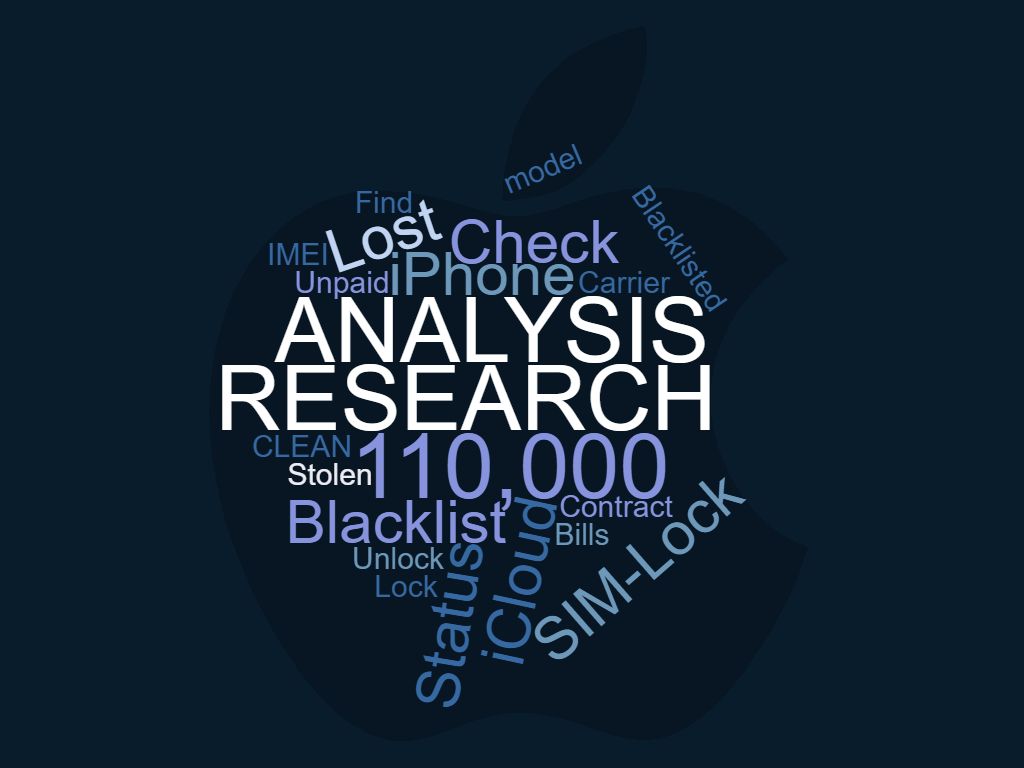 Being on the iPhone Unlock and Check industry for over 10 years, gives us the advantage to know what are the most common issues iPhone users have.

Many of our users are surprised with the IMEI Check results we provide them since they did not expect that their second hand iPhone had that Lock issue.

We decided to release in public all our findings, which will show you what are the most common issues that second-hand iPhone owners have and how to fix them.

We will focus on the following areas:

How many people know:

All of the above information are essential for fixing any iPhone’s lock, which means that in an ideal world, an owner of a second-hand iPhone should know all of them.

However, there are many cases that the user thinks he knows the answers, but it turns out not to be true at all.

So, let’s dig into our data and see what are the most common iPhone Lock issues for second-hand devices.

Some Info about our second-hand iPhone Unlock Request stats:

We analysed 141,179 entries. It was a “painful” procedure but we really believe that it will show you what are the dangers of second hand iPhones and how to get “scam-proofed”!iPhoneUnlock.Zone

During those 10 years, we had many Ordering Forms active that supported multiple iPhone Unlock services.

We focused only to the last 3 years, since we wanted to have more accurate data about the latest iPhone models, Carriers and iCloud Lock issues.

Just for your knowledge, currently there are nearly 1 billion active iPhones worldwide and it is estimated that around 300 million of them are second-hand (Source from fortune.com).

How many people know what their iPhone model is?

The 9.4% of our users, did not know what their iPhone model is!iPhoneUnlock.Zone

While structuring all of our data, we didn’t even think that we would add this statistic here, since we thought that only 1%-1.5% would not know their iPhone model.

Many online sellers use different images of the iPhones they want to sell, in order to scam inexperienced iPhone users.

By doing an iPhone IMEI Check, you will be able to identify the exact model of your iPhone, its true color, its storage and much more technical information.

What is the most popular used iPhone model?

Clearly the most popular used iPhone model is the iPhone 6.iPhoneUnlock.Zone

The least popular iPhone model (From the new ones), is the iPhone SE, which is something that we figured out without using those stats.

None of our friends, family or colleagues own an iPhone SE!

You can see that iPhone 6, 5s, 4s, 8 and X are the favorites. It makes sense, since those models had many differences from their predecessors.

How many people know if their used iPhone is SIM-Locked?

The actual % of users that are not aware of their iPhone’s SIM-Lock status is over 20%iPhoneUnlock.Zone

As expected, a very large number of our users already knew that their iPhone was SIM-Locked, since it is very easy to find out if an iPhone is SIM-Locked or not after you purchase it.

However, from a deeper research to our data, it appears that almost 25% of the users that answered that they knew the SIM-Lock status, were wrong.

Which means that the actual % of the “Unknown” SIM-Lock status is over 20%.

Tip from iPhoneUnlock.Zone:
In order to be 100% sure of an iPhone’s SIM-Lock status you need to perform an iPhone IMEI Check BEFORE purchasing it. If you want to check if an iPhone is SIM-Locked or Unlocked, try to make a phone call with two or more SIM-Cards.

How many people know the exact Carrier that is locking their iPhone?

To our question, “Do you know which Network is locking your iPhone?” the actual % of users that do not know it is close to 25%iPhoneUnlock.Zone

Our Network Unlock ordering forms include all networks worldwide, since it is important to know which network is locking your iPhone in order to unlock it.

However, the first question is “if the Lock Carrier is known” by our users.

The good news is that the majority of our users knew which network was locking their iPhone, the 76.6%.

However, a substantial % of our users (The 23.4%) didn’t have that information.

As it turns out, a 28.3% of the users that picked the “I know” answer, picked the wrong Carrier. Either they thought they knew it or they were misinformed by a seller.

Below is a chart with the % of the Lock Carriers. We didn’t include all of them, because the chart would get messy.

However, we will paste a table at the end of this article so you can get all our stats.

In terms of each Carrier’s origin, you can clearly see below the most “popular” countries:

Most Network Locked iPhones are from the United States of America.

We expected the results to be like this, since the top 10 countries in which iPhones are most popular are:

In USA, the majority of people are buying and selling second hand iPhones, which is the reason that most of our users come from there.

In Great Britain, most of the used iPhones are Blacklisted. From the stats we found that the 86.2% of all the UK iPhones that were checked by us, were Blacklisted and reported as Lost or Stolen.

In Germany, after the release of iPhone 6, all networks were selling their iPhones as Unlocked too.

In France, there are only old iPhone models that are still locked. Mostly iPhone 4 and 4s.

In Italy, most second hand iPhones are already Unlocked, but the 74% of the ones we have checked are Blacklisted, iCloud Locked or both!

In Spain, there are still locked iPhones, but users there prefer Local Repair shops, instead of Online iPhone Unlock companies.

In China, again all iPhones are being sold as Unlocked.

For Japan, we used to have a lot of customers wanted to Unlock mostly Softbank iPhones. However, the unlocking policies of Softbank network allows the user to request for an unlock with a much lower price (And in some cases for FREE).

In South Korea, all iPhone are being sold as Unlocked.

In Australia, almost all iPhones are being sold as Unlocked, which means that there is no need for an unlocking service.

Below you can see from Statista.com how Apple’s revenue is distributed for 2019.

By doing an iPhone IMEI Check, you will be informed with the activation Carrier as well!

How many people know their iPhone’s Blacklist status?

To our question, “Do you know your iPhone’s Blacklist Status?” the % of users that didn’t know is 34.5%iPhoneUnlock.Zone

The question from our end was very simple:


We clearly stated that an iPhone is considered Blacklisted when:

At first glance, the results seem to be very well distributed, but we dig deeper.

We decided to add more options about the Blacklist Status question, which were the following:

The results were much clearer after we made our Blacklist Status question more detailed:

It appears that the users did not know that in order to Unlock a NON-Clean iPhone a special service is required. That service is mostly for Lost/Stolen devices, but Unpaid Bills & Under Contract ones fall under that category as well (Only for Unlocking purposes).

So, the 38.9% of the second-hand iPhones are considered NOT-CLEAN.

Having into your possession a Blacklisted iPhone might cause you issues with your local authorities. Always check an iPhone if it is Blacklisted before buying it.

In addition, Blacklisted devices (Even network unlocked ones) are not able to operate inside the country that they were originally blacklisted and most of the times they will be useless to neighboring countries too.

By doing an iPhone IMEI Check, you will be informed if it is Blacklisted, by which network and in which countries!

How many people know their iPhone’s iCloud Status?

To our question, “Do you know the iCloud Status of your iPhone?” almost 20% of the 141,179 users, didn’t even know their iPhone’s iCloud status, which is insane!iPhoneUnlock.Zone

This is one of the most crucial question, since an iCloud Locked iPhone is very difficult to Unlock and most of the times it is impossible.

So, we had to know the iCloud status of an iPhone before trying to offer any Unlocking service.

Those results reminded us how dangerous is to buy used iPhones without making a proper IMEI Check.

Apart from “pleasant” fact that almost 90% of our users knew the iCloud status of their iPhones, the 69.6% of them got scammed (Which means that they found out AFTER the purchase that their iPhone was iCloud Locked).

Also, it was scary for us to find out that almost 10% of our users, didn’t know if their iPhone had an iCloud Lock. This means that either their bought an iPhone without even looking at its screen OR they have no idea how to identify an iCloud Locked iPhone.

We improved our question in order to see if our users had a deeper knowledge over their iPhone’s iCloud status:

What is the iCloud Status of your iPhone?

Here are the results:

This is a more accurate statistic, since many people were honestly answering that their iPhone was iCloud Locked, even if they used their own iCloud account.

We do not know which is scarier from the above, but iCloud locked used iPhones scams keep on increasing year after year, especially with “shady” offers of cheap new used iPhone models.

If you are able to get that iPhone to your hands, just try to reboot it or try an iOS update through WiFi. If you can do it, then you are find!

If you cannot check this iPhone physically do an iPhone IMEI Check. You will know in a few seconds if it is iCloud Locked or not!

From all the above data, let’s summarize our findings really quickly

iPhones are really expensive, so getting into account the above statistics buying a used iPhone without first checking it is like playing Russian roulette.

If you combine all the above stats, the chances of buying a SIM-Unlocked, Clean and iCloud Unlocked iPhone are very low.

This is from what we are trying to protect our users and this is why we created the only instant Online iPhone IMEI Check service on the market.

You will be able to find instantly if an iPhone has any of the above Lock issues and prevent you from buying it.

In the unfortunate situation that you already bought one and it has lock issues, we will be able to provide you with working & guaranteed unlocking solutions, based on your iPhone’s status.

Get an iPhone IMEI Unlock CheckInstant results to your email

Table with % of the most popular Carrier Locks: